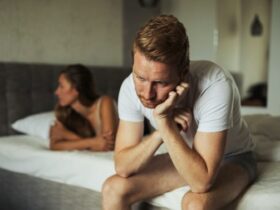 Ejaculation matter: How quick is too quick?

The time was 3.34pm, May 12th 2011, I had rushed back home to pick up something I forgot earlier when I stepped out. Somehow my house was unusually quiet with the doors open. I called out for my parents and siblings and nobody answered. I decided to just go pick up what had brought me back home but surprisingly the door to the room I shared with my younger brother was locked. It really was very usual because we had never locked the door ever. I knocked on the door on the door and I didn’t get a response, called out his name and still no response, banged on the door and the same silence met me.

Suddenly I panicked and decided to force the door open. Thankfully I came back with a friend and together we forced the door open. As soon as we forced it open, the very next sight I beheld froze me for a minute. Hanging from the fan was my younger brother who was struggling for his life. Immediately I rushed to him and held up his legs while my friend quickly dashed to the kitchen and brought a knife with which we cut the rope and brought my brother down.

I would have lost him that day but thank God I forgot something at home that brought me back a minute early. Apparently my brother had been suffering from depression for over a month and none of us his family members saw the signs or maybe we did but chose to ignore it. This story is true and not fictional and that episode opened my eyes to realities of mental health forever. But what is mental health?

According to the Worlds Health Organization(WHO), Mental health is defined as a state of well-being in which every individual can annex their potentials and can cope with the normal stresses of life and can also work productively. By the WHO’s definition of mental health, we can deduce that there two branches of mental health. The positive mental health state that enables one to accomplish goals, pursue career goals and objectives and cope with the normal life stresses and the negative mental health state which is the direct opposite of the positive and this aids one in slipping into depression and in most cases taking up suicide.

Since the turn of the millennium, the rise in the suicide rate in Nigeria due to depression has become increasingly alarming. We have all slept on the issues of mental health and have given it a different definition and ignored it and now it’s blowing up in our faces. Sadly, the government have refused to pay close attention to it by funding research institutions and building psychiatric facilities to aid in the help of mental illness cases.

Mental health for a reason has become a taboo to families that nobody talks about it and those that do often do so in hush tones. The churches have blamed the devil for suicides and instead of pointing people suffering from mental health to medical facilities, conduct deliverance sessions and pour oil on their heads. The result is the spike in the recent suicide rates. During my research, I found out that about 50% of the depression and suicide rates amongst youths is caused by their parents and or families. The constant comparisons parents give to their children, the incessant pressure on the girls to get married and the boys to start making wealth quick, the issues of always putting your children down and talking them down in public have all given rise to depression amongst the young population.

Aside the family, another major enabler of suicide are religious teachers and their ignorant followers. No wonder even God said “My people perish for lack of knowledge”. Many a times religious teachers instead of calling mental illness by its name, attributes visible signs of depression to the devil who anyways gets blamed for everything evil and bad. This trend is so bad that 90% of church goers believe depression is a spirit from the devil, sent by him to take lives via suicide. I made a conscious effort to study the Holy Book and found a story of a man who took his life by suicide and this man’s name is Judas Iscariot.

A close look at Judas’ story showed that he became depressed after realizing he unknowingly sold his master to be murdered by the chief priests. Not in any of the holy books pages was it mentioned that the devil caused his depression and eventual suicide. Our society has so been framed to mock those who check themselves into mental facilities because according to us, only mad people are admitted into mental homes. In advanced societies, celebrities and other people check themselves into mental institutions for checkups, evaluation and even treatment.

Infact it is so bad that mental homes are been joked about randomly by people and even mocked. A very good example is the psychiatric hospital along Yaba in Lagos State. It will shock you to know that about 800,000 people die yearly to suicide and suicide is the leading cause of deaths in 15-29yr olds. For every successful adult suicide deaths, there are about 20 others who attempted it without success.

Statistics shows that about 20% of the world’s young population suffers from mental health issues. Bringing it back home to Nigeria and the statistics will shock you even more. Nigeria is ranked number 5 in the world chart of suicide deaths with 15,000 suicide deaths per every 100,000 suicides in the world which is very scary. There are about 5 main branches of mental illness:

Narrowing it down to depression, there are about 9 types of depression but we shall be looking at the most common one which is the CLINICAL DEPRESSION also known as MAJOR DEPRESSION.

What are the treatments:? 1. Psychotherapy, 2. Medication by taking depressants, 3. Electrocondusive therapy (ECU).

The government needs to be much more involved in mental health issues by building mental facilities and equipping them, run ads and campaigns on the issue. Government organizations like the police force needs to perform a compulsory mental health evaluation and check on all staff and intending staff.

Churches, organizations, hospitals and families need to do more. Parents should watch what they say to their children, check on family and friends, use kind words often, check on your wives and husbands, talk to them.

Remember, you’re never alone and slipping into depression isn’t a death sentence yet so speak to someone as soon as you start to notice signs of depression. The road to redemption starts with you and #AgainstAllOdds ✊ we shall rise above depression.  – Louis Wakajugbe Mulu

Ejaculation matter: How quick is too quick?